Is there such a thing as a Facebook penalty? I run Facebook pages for several websites. My organic reach is consistently good with all of them. But once in 2015, I saw my reach on one Facebook page suddenly plummet overnight by two-thirds. What happened? 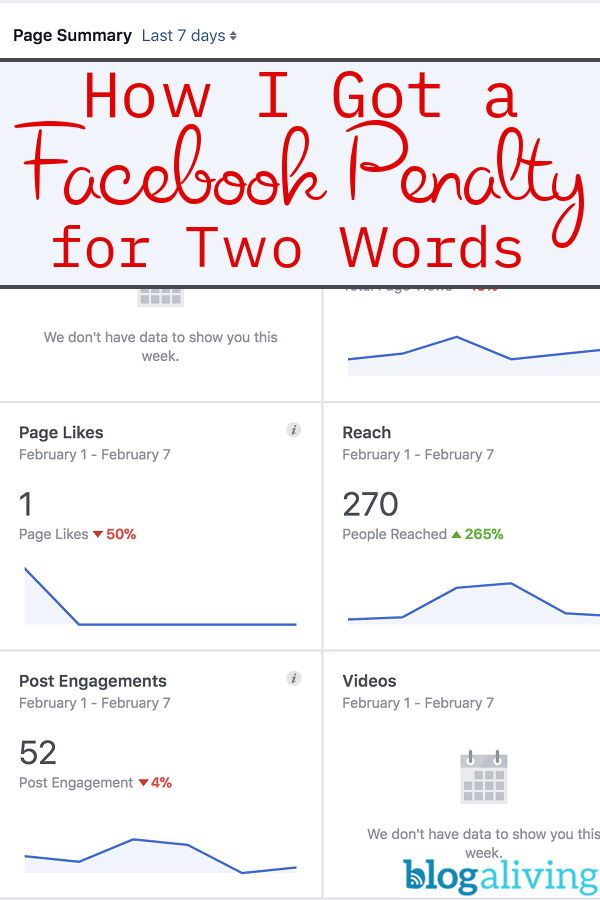 The great plummet seemed to happen immediately after one particular status update, so I took a hard look at it. It was a photo update with some very clever text on the image. I had shared the image and commented, “I like this!” It hadn’t gotten any negative feedback – no one reported it as spam, or hid the post, or unliked the page in response to it. The image seemed to have done just fine on other Facebook pages.

Like you, I see loads of popular pages advising people to “Share this if you think cancer sucks!” and I assume it’s not hurting their popularity with Facebook, or they’d stop doing it. Or maybe they’re so popular, the boost from all the shares offsets any penalty. Or maybe Facebook doesn’t really mind you begging for shares, but does mind clicks and likes? That seems unlikely.

Anyway, I wanted to rule out the possibility that there was something wrong with my page. It’s a modestly popular page. I did buy about a thousand likes from Facebook to get the ball rolling years ago, but never fake followers. My engagement has only increased over time, so I ruled out a fake follower problem. Eventually, I had ruled out everything I could think of, other than a “like this” penalty, so I had to just wait and see if it went away.

Two weeks later, almost to the hour, the penalty disappeared and my reach skyrocketed up to twice the amount of likes. That left no doubt in my mind that I had been given a two-week penalty for saying “like this” in a status update. All because with so much talent at their disposal, Facebook can’t write an algorithm that can distinguish the context of “I like this” or “is that object like this one?” from “Like this status so I can game the Facebook algorithm.”

It’s probable that, like Google, Facebook assumes everyone is out to game their precious algorithm, and the algorithm must be protected at all costs. Because it’s such a clever algorithm, right? “Oooh, me see bad words. Me assume worst. Me hit penalty button.” Memo from reality, guys: it would be cheaper to train monkeys.

Here’s what the penalty looked like. In addition to my reach plummeting one afternoon and skyrocketing in the afternoon precisely two weeks later, I noticed some other things.

I will never again put the words “like this” together in a status update, in any context. I instead say something like “love this” or “this is cool” or, when making a comparison, “such as this.” Just to be safe, because it’s really that ridiculous.