GetResponse has left me in tears today as they hold my business hostage. After many happy months with ActiveCampaign, I recently signed up for a trial of GetResponse last month. I immediately fell in love with it. Then I tried to send my first newsletter, and here’s what happened.

GetResponse is a highly recommended, well-loved email newsletter service. And as soon as I signed up for a free trial, I understood why. It has lots of awesome features. I was a little disappointed that the opt-in forms weren’t responsive. I also found the module where you draft your newsletters clunky. It kept refusing to let me have more than one tab open in it, and I like to cut and paste things from other newsletters I’ve sent. It also lost links anytime I tried to move a chunk of text from one paragraph to another.

Other than that, though, it was on par with ActiveCampaign. Plus, it had landing pages and webinars and cool features like that. And a more generous affiliate program than ActiveCampaign.

But then I wrote up that first newsletter. I got it scheduled and set to go, and then this warning appeared on my account. I’ve drawn arrows to highlight the warning. 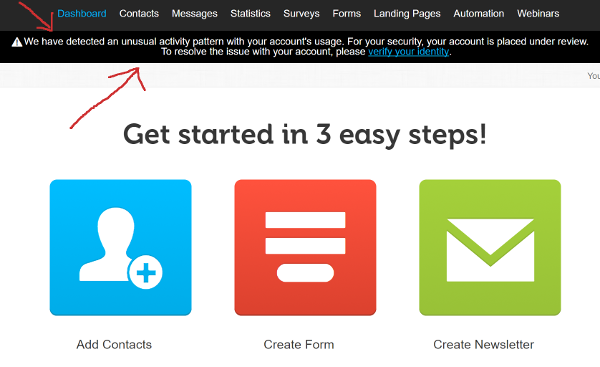 I had no idea what it was talking about. And when I clicked the link to find out, it said they wanted me to send them a government document with my photo ID on it. My first response was, “No way.” I talked to support in chat. While they weren’t very helpful, because they aren’t allowed to know or tell you anything about your case (?), they did explain that my ID would be deleted as soon as they had reviewed it. The first representative also assured me that “Compliance” would review my case in far less than 24 hours.

No more phone support at GetResponse

I had an email set to go out tomorrow, and I was feeling desperate, so I sent them my drivers license (I’ll never do that again).  And now suddenly chat was telling me it would be 24-48 hours before Compliance got around to reviewing my account. He sent my email to them in an attempt to get them to review my account more quickly. (It didn’t work.)

I asked for a phone number to talk to someone higher up or in Compliance. Compliance doesn’t have a phone line, I was told – just an email, which they gave me, and which I used. GetResponse used to have support by phone, but they took it down last Friday. Last Friday.

Y’all, something is up with this company.

Now my account is “limited” until Compliance gets around to reviewing it during normal business hours in Poland, where they are located (also never again). This means I can’t export contacts. I can’t send emails. I can’t even go in and unschedule the email I had just scheduled to go out tomorrow when all this happened. My opt-in forms will keep collecting subscribers, but I can’t add them on my own (not that I ever do that, except when importing).

Did I do something wrong?

I had imported my contacts from another service. I’ve never bought lists or done anything spammy. I’ve only ever just put forms on my sites and let people sign up for my newsletters. If anything, I’m not aggressive enough in pursuing email signups.

But I’m also the first to admit I can screw things up by accident. It turns out they have an AI with algorithms that decides your account is being spammy. It’s called Hydra (my first thought on discovering the name: of course it’s evil! It’s Hydra!). I found this page explaining what triggers the Hydra system to flag your account as suspicious:

As far as I can tell, none of those things applied to my account activity. I certainly hadn’t done any of them on purpose, so maybe someone had accessed my account? Unfortunately, I’ll never know what happened because:

Our policy is that we don’t disclose the logic behind Hydra or the artificial intelligence (AI) algorithms that support it. Regrettably, we can’t provide more information about why your account was suspended.

Terrific! So if I don’t know what I did to trigger it, and they won’t tell me, I have to assume this is going to happen again. Possibly every time I try to send a newsletter.

One chat representative did tell me he understood how I felt and that he’d seen people flagged for nothing at all, and he would pass on my feedback to management.

I don’t feel safe with GetResponse

As I told one chat representative:

(Yes, I’m within the free trial, but the point still stands since this could happen to a paying customer.)

Now, don’t get me wrong. I want my email provider to stop the spammers. Of course I do. If they let people abuse their service, the open rates fall and it’s bad for all the good customers. But the reality is, any automated system like this Hydra algorithm they’re using is going to produce false positives. And their human review team, which exists to take care of those false positives, is working bankers’ hours in Poland and is obviously not staffed enough to handle these problems in a timely fashion. 24-48 hours to get back a service you’ve already paid for and rely on is just not acceptable.

So, Hail Hydra? And goodbye, GetResponse. Nothing they could do or say at this point would make me comfortable. Even if they straighten out the issue, I keep wondering why did they remove phone support? Are they struggling financially? Is that why they don’t have enough people to review your account in a reasonable amount of time?

I know GetResponse has had great reviews for years. I’m not disputing any of those reviews. I just think maybe something is changing, and you want to watch things closely if you’re with GetResponse.

The end of the story

Compliance has now lifted the limit on my account. They never did email me back, which is unacceptable as customer support for me. My scheduled email did not go out, throwing off my whole business rhythm.

I’m still moving back to ActiveCampaign as fast as I can, because I have no idea why this happened or whether it will happen again. And now I can only hope they’ve deleted my ID from their servers like they promised.

The Theme I Use

If your PC gets infected, your website can become infected, too. Don't let it happen! My PCs run: